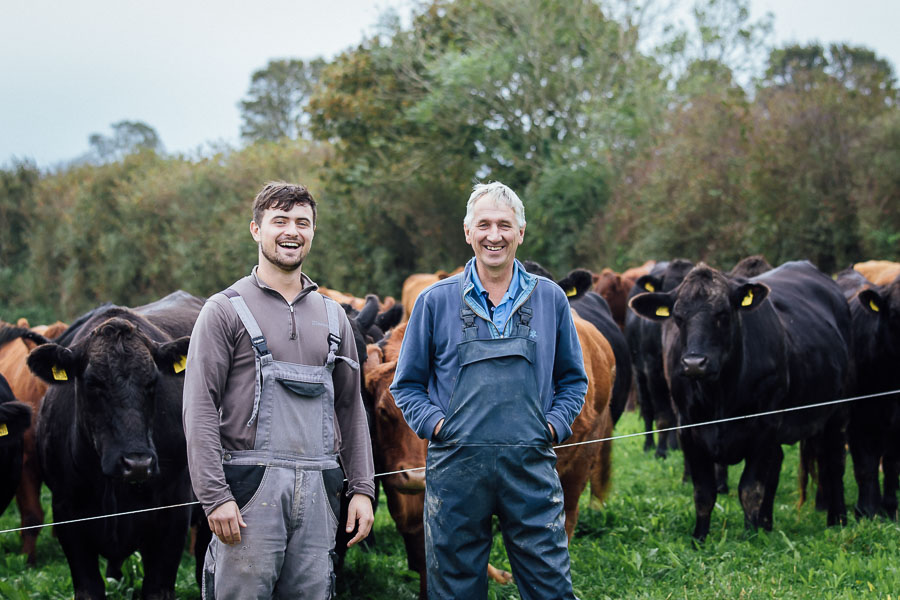 Take a listen to Sam and Mike talking about their farming system, the changes made and how Precision Grazing has helped along the way

“It was good to be asked, as farmers we rarely get challenged and so carry on doing what we have always done. If James hadn’t asked those questions we would still be in the old system”

A family to not follow the ‘party’ line, Mike and Sam Roberts have been making some radical and crucial changes to their farm.  Change is something they are familiar with, moving from a mixed farming system, to rearing calves and sheep to selling them to start a suckler herd then change genetics from Limousine to Stabilisers.

The summer of 2019 was dry, the cows had only been turned out in mid-April but by mid-September there was no grass for them! Sam who had come home to the farm after a few years in the building trade was frustrated, surely this wasn’t normal?  He had seen James from Precision Grazing talking at a National Beef Association event a couple years previously about the benefits of rotational grazing and how it could extend the grazing season, perhaps this was something they could do?

Mike however was reluctant to have a consultant on farm, what do they know different to what we know? However, thanks to a family connection he knew James was a “decent chap” and so agreed to a meeting.

James was focused, and when he came out for his initial visit he wanted to hear about the farm, see the accounts and farm maps but also was prepared to ask the more difficult questions; ‘What do you want to do?’, ‘Where do you want to be in 10 years?’

It was good to be asked, as farmers we rarely get challenged and so carry on doing what we have always done. If James hadn’t asked those questions we would still be in the old system – Sam

With James’s help they pulled apart their end of year accounts to extract the income and costs relating to the suckler cow enterprise.  These were converted into a set of management accounts which told them they were in the top 10% of suckler farmers in England (according to AHDB Benchmark), however, despite this they were only making £26 per cow (before BPS but not including labour).

Hearing that really concentrates the mind and a made us question what we were doing – what was the point of it all? Mike

For Mike and Sam, it was clear that to increase profitability they needed to reduce costs or increase output or both!  Listening to their personal interests and aims – to spend less time sat on a tractor, to grow the herd, to afford to take some rented land back in hand and be able to take more time off the farm, James developed a new plan for the enterprise.  This was based on using rotational grazing to increase pasture grown and utilised, allowing a reduction in the costs of nitrogen fertiliser, purchased feed and housing whist increasing stocking rate and animal performance.

Sam was keen to start, however for Mike, talk of electric fences had visions of cattle out wintering on forage beets, paddling in mud, no fun for the person moving the fence or the cattle standing in it!  With some discussion and persuasions Mike agreed to adopt the 5 Year vision with the compromise of a “proof of concept” trial in Year 1

Two fields totalling 9ha had recently been reseeded with a herbal ley, this was identified as a great place to start paddock grazing; it was split into 9x 1ha paddocks using temporary electric fencing, each with access to water via a pipe on the surface to 2 x permanent troughs.  The pasture was measured, with Sam receiving training from James on how to use a plate meter and in mid-March a bunch of weaned steers were put out onto it, the differences were clear to see.

That year was a tough one, a dry cold spring, and yet the grass in that paddock grazing grew back really well whist the set stocked cattle on other parts of the farm had nothing in-front of them!

The paddock grazing system exceeded all expectations, even yielding surplus silage whist growing the steers at over 1kg a day.  With the trial a success thoughts turned to the rest of the farm, keen to get on, Sam starting using temporary fencing to fence and divide more fields into paddocks for other groups.  Although effective in extending the grazing season this had a high labour cost.

Thankfully they had applied for a Mid-Tier Countryside Stewardship scheme in a bid to improve their boundary fencing which had been neglected whist farm profit had been low.  This was helpful as the funding received for this essential work helped to release cash to spend on sub-dividing the larger fields into paddocks.

In Year 2 to help reduce labour and continue to increase productivity James helped them to set up a paddock grazing system in 4 permanent pasture fields totalling 36Ha.  Previously grazed by two groups of cows and calves who would rock forward and back between two fields, a permanent 2 strand electric fence was erected through the middle to divide them in half and across both ways in the largest field to divide that into four.  A new water system was installed with 32mm pipe suppling permanent concrete troughs located in the central fence every 200m ran down its middle.  This set-up means that with a pair 200m of temporary electric fences 36x 1Ha paddocks can be created.

Previously with 2 groups and four fields 18Ha would have been getting grazed at any one time, now thanks to the paddock system two groups means only 2ha is being grazed and 34ha are being rested.  Because of this the increase in pasture productivity and quality has been amazing.

Creating infrastructure, which enables a rest period between grazing events allows more pasture growth.  When you set-stock the animals are grazing the regrowth, meaning you have to resort to nitrogen fertiliser or creep feed to lift the productivity.  Investing in infrastructure is a one-time investment; you remove the need for those high-costs, annual inputs of fertiliser and feed as well as the associated labour.

In 2020 Mike and Sam were invited to take part in Farm Net Zero Project which aims to demonstrate how livestock farms can achieve Net Zero within 5 years.  This has opened them up to new information and thinking sparking another level of interest in soils, carbon and the value of diverse species mixes.  One of only three farms in Cornwall to be chosen as part of the project, they have planted different winter forage mixes containing 3, 6, 10 and 13 species.  Some to the species chosen include; radish, rape, kale, forage rye, vetch, oats, crimson clover and sunflowers. Drilled in late August, due to the dry summer, the diverse mix has grown really well considering its slow start.

The aim of this work is to quantify the benefits of increased diversity on soil health, carbon sequestration, animal health and performance and overall system carbon footprint.  As an additional aim Mike and Sam would like to find a way to stop using Glyphosate when re-seeding whist minimising tillage.

Chemicals have displaced management and effort, they have been a quick fix, time wise, but not for the capital of the farm or the soil – James

Alongside the diverse species winter forage crops mixes aimed at weaned calves, they have used their rotational grazing to build up a bank of pasture (differed grass) for the dry cows which will be fed alongside hay bales already placed in the fields.

It is exciting to see where a farm can come from and get to.  The whole farm has been soil sampled, for organic matter, P & K, and micro-nutrients.  Some land has relatively high organic matter (16%) but low active carbon meaning nutrient cycling is low, other fields, historically used for arable have lower organic matter (4%).   Both field types have the potential to increase their stores of carbon whist increasing nutrient availability and rotational grazing is a key tool to achieve this.

As the soil health improves so will productivity – this creates a win-win meaning more organic matter is return which in turn feeds the soil biology, it’s like a big fly wheel gathering momentum. – James

As Blable farm moves forward to producing more from less, they will be looking at getting the right genetics for their system, selecting the Stabiliser bulls that suit being grown and finished off pasture and introducing another native breed to use as a terminal line.    They will continue to invest in infrastructure and herbal leys to reduce labour, lift productivity and improve soil health.

Seeing the vision of an improved bank balance, with cattle out for longer and less slurry to handle and less time on a tractor has seen those initial difficult questions answered and fulfilled.

We changed because we had to, but when we had to we wanted to – Mike

Farming is changing and changes are coming fast, highlighted by not only BPS coming to an end but the rising costs of inputs and climate change. Knowing your strong and weak points is key and getting someone like James from Precision Grazing to come and look at your farm through different eyes is so important and to ask those difficult questions.