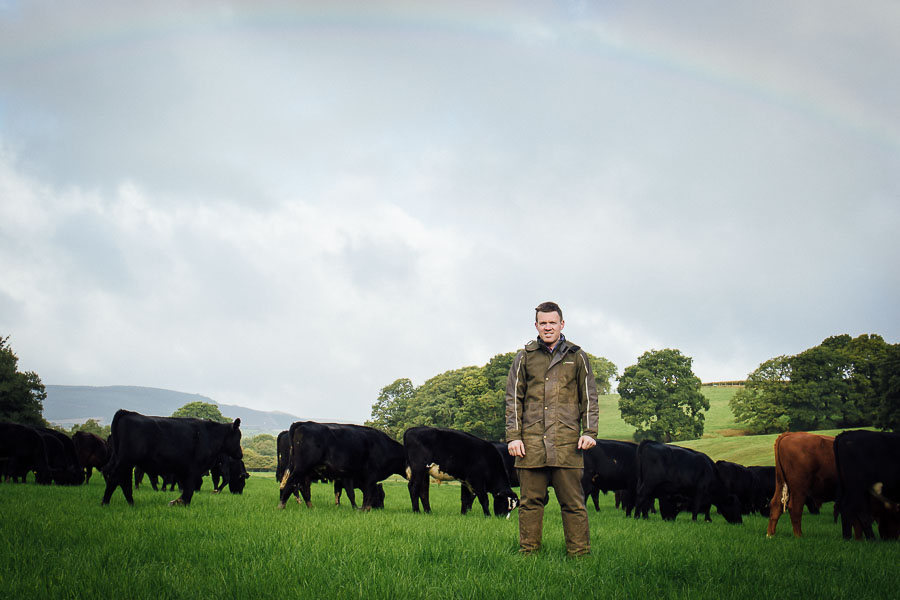 Take a listen to Neil talking about his farming system, the changes made and how Precision Grazing has helped along the way

“Working with Sarah helps me have a clearer picture of where I need to be and what actions I need to take such as, housing stock, supplement feeding or to sell stock.  This saves me a lot of time, money and minimises procrastination!“

The decision to come back to the family farm was an easy one for Neil Davies, sheep and beef farmer from Llangammach Wells, “because once you sell the farm you will never get it back”, and he didn’t want that that happen. A partial return 15 years ago, whilst still working as a carpenter, saw long days and so 12 years ago the decision was made to farm full time.

Neil was very busy following the same system as his grandparents; 50 Belgium Blue x Lim suckler cows and 2000 ewes, kept on the Epynt, lambing at home and taking lambs through to finish.

Having moved to live on the farm 4 years ago, Neil and his wife Sian started to think about making changes to the traditional  system. Lack of labour was a key driver for them to seek to build efficiency and ease of management into the system. Traditionally lambing and calving took place at the same time however too much time was being spent with the cows mean lambing performance suffered.

Hiring out his shed to Farming Connect for an on-farm event was the catalyst of change. Neil is a keen participant in farm walks and discussions groups and was interested in becoming a Farming Connect demonstration farm; with emphasis on making the most from grass, slurry and re-seeding trials. This was also an excellent opportunity to take the advice and guidance from Precision Grazing to improve their farming system.

One of the most important things for me is to see with my own eyes how someone else is doing it, and to learn from their mistakes and triumphs.

Neil had been following a 5-year re-seeding regime and had improved his swards with a ryegrass, clover mix, but felt the grass was not being utilised properly. This is where working with Sarah from Precision Grazing offered an opportunity to step back from the day to day work, review objectives and implement a system that put pasture first.

Sarah Morgan says “The first step to change was aligning the enterprises on farm to match the pasture growth curve as closely as possible, maximising the amount of grazed grass utilised. This involved using farm management software FARMAX to produce a number of scenarios and analyse which would suit the farm going forward best, in terms of production, profitability and sustainability.  To utilise the pasture and reduce the peak work load the suckler herd was dispersed, and a dairy beef system was set-up with 150 Angus X dairy calves arriving weaned in the spring and being taken through to finish at 20-22 months.”

Once a plan for the type of livestock enterprises was in place, Sarah then assessed the existing fields and infrastructure to design a low cost but effective paddock system  ensuring paddock sizes were as even as possible with a plan for access water.

We had quite a few small fields already, so we’ve kept them the same but split the bigger ones into paddocks, especially the 18 acre fields!

The previous system saw fields being set stocked, with sheep grazing for 2 weeks before being moved on, the sheep were selective and grass went to seed. Turning to a rotational grazing system sees the grass being grazed  quickly and evenly, allowing the plants to then recover before being re-grazed again once they have fully replenished leaf and root reserves. This has seen the quality and yields of the pastures improve and allowed the percentage of clover in swards to increase.

Another advantage of the regular move is less poaching, the cattle aren’t standing around field corners and gateways, and on the wetter days the cattle are moved every 12 hours. The system offers flexibility and is adapted to weather and time constraints.

It’s easy to work out the grass demand and therefore area required for grazing each day for 150 cattle on farm for 12 months, it’s been more complicated with the sheep, but having Precision Grazing at the end of the phone has been a great help in making it work.

Precision Grazing came in and looked at the whole farm, from the hill down to the farm ground.  One of the main changes was to reduce the number of livestock groups on the farm and ‘mob up’ existing livestock into larger groups allowing for reduced labour and more effective grazing pressure.

We still set stock at lambing, but when they are about 5 weeks old we bunch them up into bigger groups and start them rotating. This has eased management and allowed us to reduce the need for so much subdivision. Initially I was worried about stock performance in larger groups, but they have exceeded expectations.

Cattle growth rates are monitored throughout the grazing season, aiding decision making and provide confidence that the cattle are performing. This year they averaged 0.9kg Liveweight per day on pasture alone which Neil was very pleased with considering the dry summer. The focus has moved away from sale price per head to margin per head and per ha.

Multi-Cut silage is fed when they are housed along with a whole crop forage, minimal blend is mixed in as they move away from feeding concentrates.  They are then turned out to grass the following spring or sold when they reach their ideal store weight of 500kg.

I’m pleased with the cattle they’ve averaged 0.9DLG over the summer, we made some lovely silage so I hope this will push them over the winter. I was worried going from 50 sucklers to a 150 Angus X but they really fit well alongside the sheep and there is a lot less labour involved.

The paddock system is set up each year in January, using the Rappa fence system, to ensure it is ready to go from April onwards. Most of the fields are split into 2ha paddocks, fencing is easily removed when the silage fields are closed, or as like this year, a field of turnips have been planted.  3 strands of wire are used to ensure that flexibility for cattle and sheep to graze the system.

Water was the biggest problem for Neil, however working with Precision Grazing and mapping out the paddocks and trough locations has made this doable. Previously mains fed water troughs were in the field corners so these were moved and now service multiple paddocks.

Using permanent troughs, although a greater investment, keeps the system simple, which is a must for us when we are busy during lambing, we know everything for the cattle is set up and ready to go.

Having Precision Grazing come in and look at the whole farm made Neil look at the farm differently, instead of seeing fields that were ‘just’ for calving cows, or some ‘old pasture’ just for a few ewes, every field is now part of the farm and not looked at in isolation, it has become a whole and the positive changes in those fields are already noticeable from using the paddock grazing system.

The farms PH levels have improved since using this system, from averaging low 5s, most of the fields are now up to a 6 – 6.5. The increase has been a result of  spreading lime and paddock grazing which sees organic matter and improved phosphate and potassium indexes through the livestock doing the work of leaving their muck behind evenly distributed across the field.

There is still room for improvement, our P & K indexes are around 2, but we are definitely going in the right direction. It is 4 years since Farming Connect did a whole farm soil sampling, it will be interesting to see the changes.

Having the Precision Grazing team on board has seen Neil make less mistakes than if he started paddock grazing on his own, watching online tutorials can take you so far, but having the help and advice at the kitchen table will take you further.

Get advice from day one. Looking back it is something I should have done, regardless of being a Farming Connect demo farm. This is a big change to your farming system, so it’s worth getting it right.

Neil is now confident in using both Agrinet (Pasture measurement programme) and Farmax (Farm Management) hand in hand to assess the quantity of pasture on the farm and forward plan key decisions to ensure he has sufficient feed looking ahead.

Measuring and monitoring the pasture available, moving the stock regularly and resting the paddocks for >35 days, set the farm up in a good position for when the rain arrived following the dry summer of 2022.

How we are using the farm has changed quite a bit, we are making use of fields we once overlooked, and making the bigger fields into paddocks has really improved grass growth in them.

The most challenging part of changing to a new system was for Neil to ‘get his head around it’, working out stocking rates and having more cattle on the farm.  Having Precision Grazing to help with advice and guidance made it a doable change.

Neil feels the return on his investment of time and attending meetings is ‘massive’ and a figure really can’t be put on it.  He knows he is fortunate to have received this as being a Farming Connect demo farm, but the investment into setting up the system, taking the time to grass measure and use the apps has so many benefits to him and the business.

I would never go back to what we were doing before

Being part of a Prosper from Pasture discussion group and Welsh Pasture Project, run by Precision Grazing has been an important part of the journey, being able to speak and meet with other farmers who are facing the same problems, means Neil has not felt alone during this time, which was especially important during the dry summer and knowing they were all facing the same issues.

Losing the BPS is a concern, and Neil feels he is not yet there in terms of farming without it, however the new system means he can carry a lot more stock and selling the 150 head of cattle yearly ensures more income.

We are definitely in a better position than we were 4 years ago. Using the paddock grazing system means we are managing the grass better which results in higher yields which in turn has meant we can produce more  to sell with less inputs

The next five years will see Neil concentrate on getting water into all the paddocks, look to split them even more, start with some herbal leys and to improve on what he has already done.

I will never for back to that system, going forward we are going to build on what we have achieved and make it even better.